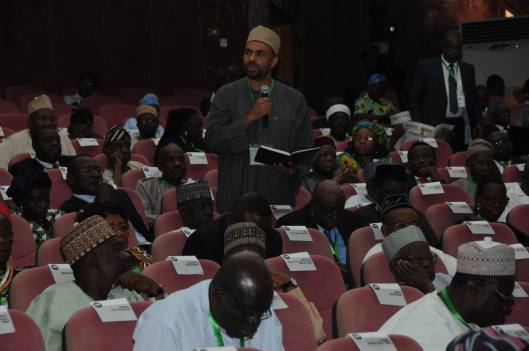 1. The urgency of a National conversation on consolidation of our Democracy is clear.
2. The President’s statement to Conference and discussions by delegates make it clear that our focus is on how to remodel Nigeria’s Centralized Federalism.
3. To achieve the objective of remodeling a Centralized Federation to a balanced Federation is to keep in mind these principles;

i. Federalism is best suited for Nations with diversity, especially in relation to ethnic, language and religion.
ii. There is no supermodel of Federalism so there is no one size that fits all. The 28 Countries in the world that are Federal are all different.
iii. Federalism unites diverse peoples, but supports assertion of distinct identities and recognizes autonomy in certain matters. Federalism unites without eroding identity of distinct groups.
iv. Striking a balance and identifying a workable Federal Model that is inclusive is a challenge for every country.

1. DEVOLUTION OF POWERS
(1) Exercise of Legislative Power between the Federal and State is divided into an Exclusive and Concurrent Legislative List. The Federal Government exercises power over 68 items on the exclusive list and 30 items on the concurrent list. The State may exercise power on the concurrent list of 30 items only if the Federal Government has not already “covered the field” in any of the 30 items. In effect State Governments really have no power.
(2) It is suggested that massive devolution of powers from the Federal to the State Governments is vital. There are 2 kinds of devolved power – Political and Technical. Technical devolution is easier to agree than political. Nobody will argue that the States are better able to manage drivers’ license, trade within States, prisons, than the Federal Government. State Police may be more difficult as it is perceived to mean exercise of political control.
(3) The concept of shared or joint power helps to resolve some items of power seen or perceived to be “political” – Electoral, Police, Judicial, etc. On Police, the concept of municipal policing for States is a possibility, while streamlining the present Nigeria Police Force in a shared power scheme between Federal and State Governments.
(4) A new list of Legislative powers may be divided into:
a. Exclusive – Federal
b. State – States
c. Shared – Federal and States
d. Residual – States
(5) Patterns of Distribution of some Powers within Federations based on a study of 28 Federal Constitutions (just a rough guide) – (indicating which government may exercise powers)

* Supreme and Constitutional courts are almost always established in the constitution and are thus not a head of power. In some federations, municipal, or local governments are also constitutionally established.

2. WHAT ARE FEDERATING UNITS
(i) Federations are shaped by historical processes. They can have as few as 2 units to over 80. Populations of federations vary – India with well over a billion, to St. Kitts and Nevis with only 46,000. Nigeria’s federating units has generally reflected it’s diversity.

Three Federating Models
(ii) The six geopolitical zones broadly accommodate Nigeria’s diversity but not in full, as the number of States within zones are unequal. To balance, it is possible to present the zones as the new federating units with freedom to each zone to create states and any number of local governments. (Model 1– Zones)
(iii) On the other hand is the retention of 36 states as Federating units but allowing for equality of states within the zones, making creation of 7 new zones necessary (Model 2 – States)
(iv) In addition is the possibility to constitutionalize the zones to allow each zone to pass legislation and share political, economic and judicial institutions. This will mean that States are federating units
(v) Additionally, the concept of federating units may include recognition of special areas and cities of federal significance and minorities in need of special protection (Model 3 – mixed zone states)

3. FISCAL FEDERALISM/REVENUE SHARING
(i) Arrangements around the raising, sharing and spending of money are critically important for the functioning of Federal system and often evoke political tensions.
(ii) Assignment of Revenue Power in 28 Federations
• Generally speaking, central governments in Federal systems collect at least 50% of the Revenue (USA, Canada, Switzerland)
• In Austria, Australia, Belgium, Brazil, India, Germany and Spain, the Federal government collects between 60 & 75%
• There are some Federations where the central government collects over 80 percent. Nigeria and Venezuela are the most extreme cases, with central revenues of 97 and 98 percent respectively.
• The challenge in Nigeria is how can we create a balance between the Federal and State Governments in Revenue Sharing?
• The first broad principle is for Federal Government to allow States control over Natural Resources in their domain.
• The second principle is the possibility to isolate Hydrocarbons as it is for now crucial to the Nigerian economy, and create transitional provisions to transfer ownership to oil bearing States over a period but in the meantime review percentage derivation? Create a sunset clause after which the transition period will end.
• Review Land Administration within the framework of the Land Use Act, but with ownership returning to original owners
• Review Tax Administration so VAT, for example is State and not Federal Tax.
The General principle is to rebase the formula to share revenue, essentially by;
(i) Transferring ownership of certain resources to States,
(ii) Reallocating some taxation to States; and
(iii) Re-allocating money to States as a result of major re-allocation of power from Federal to State Governments.

5. REPORT OF THE CONFERENCE
Conference, in addition to producing a Report ought to draft an Executive Bill and attach a draft Constitution, incorporating our resolutions. In order to make our work relevant, it should be recommended to the President to send an Executive Bill to the National Assembly for Referendum and enactment of a New Constitution.